Wasps in gardens, picnic areas, pub gardens and communal areas in the summer months can quickly become a significant nuisance. Wasps are a social insect, forming colonies comprising anywhere from 5000 – 10000 wasps each season. 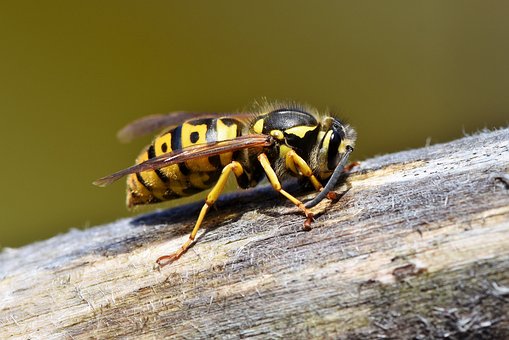 The nest starts of as a golf ball sized nest made from chewed bark, dried lumber mixed with spit, within this starter nest she places between 10 and 20 eggs, the first brood of mature workers (sterile females) will take over the development of the nest and providing food for the next lot of eggs being laid by the queen. At the beginning of the season wasp pose minimum threat (this can be a different matter if the nest is interfered with) and it is only towards the end of the wasp season they become a nuisance towards individuals.

The remaining workers and few remaining men become lethargic, and their feeding on over-ripe fruit will produce a”tipsy” behaviour, resulting in aggression towards anyone interfering with them. The on-coming winter will kill off the workers and the remaining males, with only the fertilized queens surviving by hibernating. During this nuisance period, the wasps will be bothering the public in places like pub parks and gardens etc, they tend to feed off the sweeter food stuffs such as children’s lolly-pops, soft drinks alcoholic beverages, and pretty much anything containing sugar.

Obviously the nest (if near by) could be treated, but this may mean that the area being out of bounds for up to 24 hours, this could then lead to loss of business and loss of profits. However other methods for dealing with wasps can be found. New wasp treatment systems like the waspbane may be accessible to obtain from Wildlife Control.

The wasbane is a wasp trap, the wasps are attracted and lured into the trap with specially developed attractants, the wasps enter the room of the trap to get into the attractant, once the wasps have entered the trap they cannot escape. The trap can be placed at the bottom of the beer garden, around parks, or dangling from trees. In a recent study in a famous theme park, it was recorded that after installing the waspbane trap in various locations around the park, reports of wasp sting went down as much as 95% in 1 year.