The cottonmouth snake aka water moccasin which belongs to the Agkistrodon household, along with the copperhead is one of the most feared and respected venomous snakes in america.

They are the only semi-aquatic viper on the face of the planet. You’ll also notice that they have keeled scales to assist with life in the water. Though they are known to remain predominantly in deep rural areas of wet land, here lately in places like Miami, Fl they’re being located closer and closer to establish neighborhoods and businesses as their natural habitats are being developed into residential and business properties.

The eastern subspecies can be found along the coast of Georgia, South Carolina, North Carolina and even into southern Virginia. 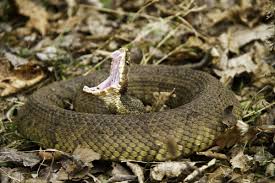 Can be identified by the manner in which they swim. Cottonmouths swim with nearly all their bodies over the water, while non-venomous water snakes swim nearly submerged.

They are territorial and often investigate disturbances in their region. They are even reports of these swimming out to boats on the water.